It has been a while since I posted here, but I have been slowly catching up with the updates on my modeling log, after falling well behind.

Edit: It often helps to include a Link when referring to a different webpage - D'oh!
Posted by David at 22:39 3 comments:

While it's been several months since I last updated this blog, I have continued to potter away painting 10mm War of the Spanish Succession and, more recently, 10mm Fantasy figures.

While I love my 15mm Fantasy figures - the level of detail and the shear variety of poses and types - I'm finding myself drawn to 10mm Fantasy and the possibility of huge battles at a reasonable cost. Rules-wise, for Fantasy I'm still looking at Lords and Lands (which I have played and enjoyed), AD&D Battlesystem (which would fit in nicely with our AD&D game - though I would probably modify it to get rid of individual casualty removal), and added to the mix With Sword and Shield (I took part in the playtest and quite liked the rules at that point), Chronicles of Blood (a simple, solo system recently recommended to me), and Battle Valor.

For War of the Spanish Succession, we have been using Black Powder from Warlord Games, which gives a fun, quick game. John and I managed to fit in a couple of battles during the Christmas break and are getting the hang of it.

I have five brigades completed and enough figures to make up a couple more.

More photos here.
Posted by David at 22:18 No comments:

Finally updated my Modelling Log for July with some Dwarves and Wood Elves and the first 10mm scale figures I've painted for a War of the Spanish Succession project.

[15mm Fantasy] Some thoughts on basing

Occasionally, the subject of multi-basing comes up. I thought it might be useful to show how I do it - in case my process helps inspire someone else. 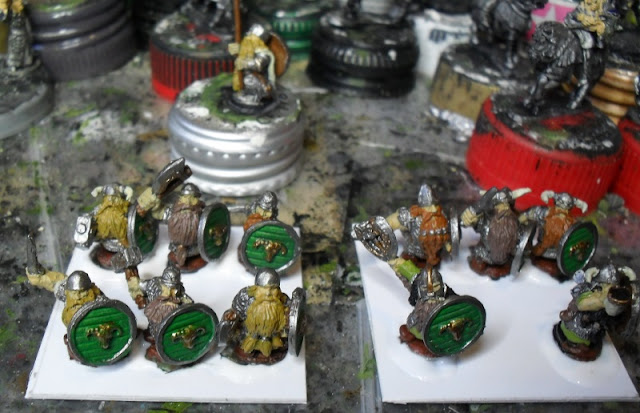 The right-hand base currently only has five figures on it. The missing figure - the standard bearer - is still on the painting lid while I work on the standard. 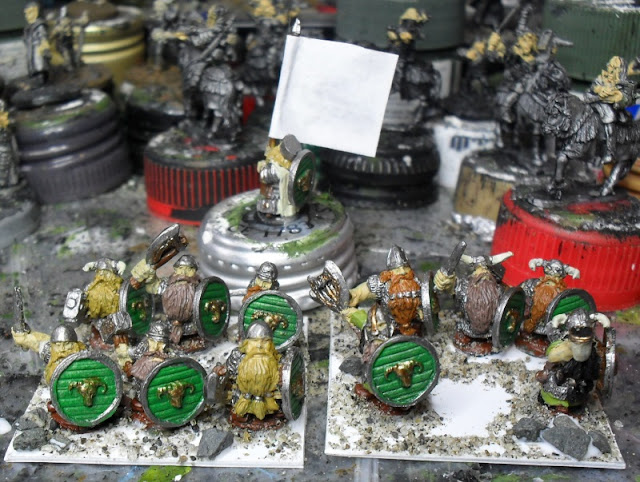 Once the glue holding the figures had dried, I painted the bases with a PVA and water mix and then added sand for texture. While that was drying, I added some larger stones as boulders. I kept the space where the standard bearer was to go clear of sand so there would be a clean surface for the glue to grip. In the background, the unit's standard - made from standard weight printer/photocopier paper - has been added to the standard pole. 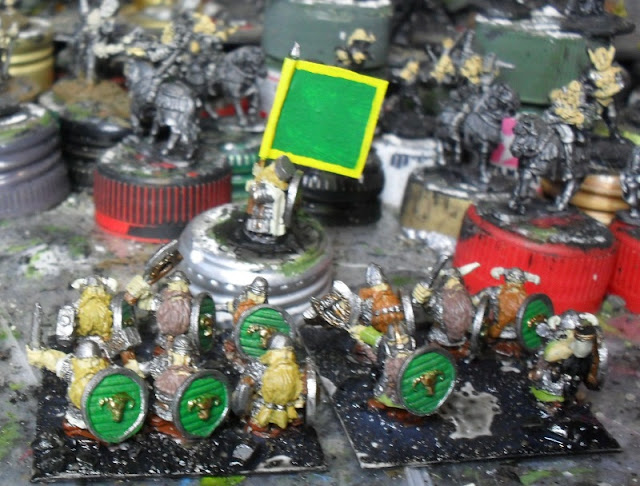 Once the sand and PVA mix had dried, I then painted the sanded base with black undercoat to seal it. Once the undercoat had dried, I then painted the bases with my base green - Tamiya Nato Green XF-67 - and painted the "boulders" and some of the sand Games Workshop Mechanicus Standard Grey - in my Fantasy world, all stones are granite or slate.

The eagle on the Dwarian standard is a Veni Vidi Vici transfer and the patterning on the yellow border was made with a fine tipped felt-tipped pen. 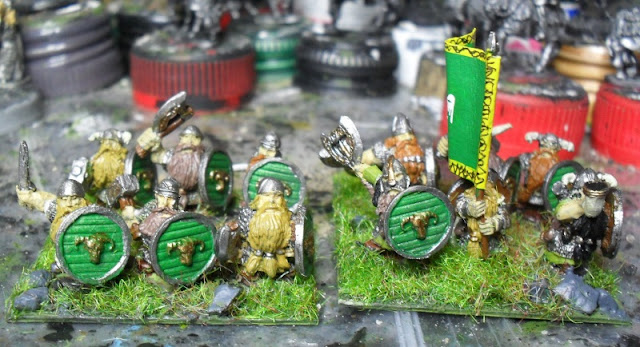 Once the paint was dry, and the standard was complete, the standard bearer was glued to the base. After everything had dried, I then coated areas of the base with a PVA and water mix, and then flocked. I have two different colours of flock I use as fields do not tend to be a uniform green colour. 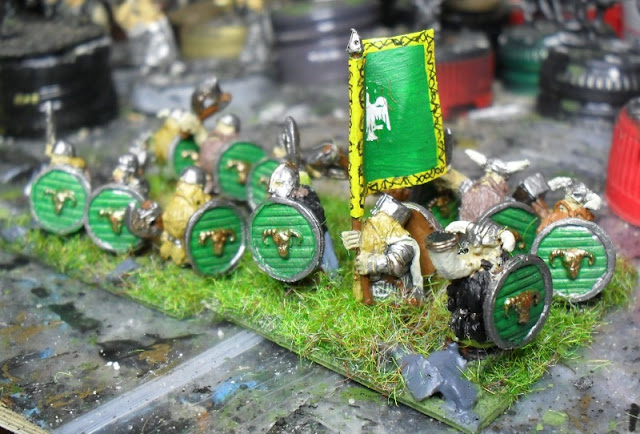 The completed unit. Painting on the PVA/water mix allowed me to control where the flock adhered, which allowed the boulders to pretty much emerge from the flock unscathed.

And that's pretty much it. Given the drying times of each process, I tend to paint the figures during the weekend and then work through the basing during the week - one step each evening.

Further examples are here on my Modeling Log.
Posted by David at 20:05 No comments: 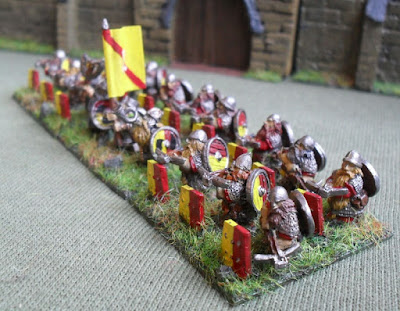 Another update of my painting log featuring, amongst others, these Battle Valor Games Dwarian Crossbows.
Posted by David at 22:10 No comments:

I managed to get a few more figures painted in March than in February. Here are a few extra random photos: 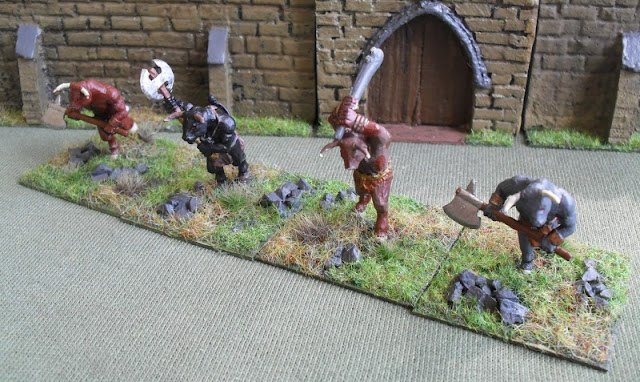 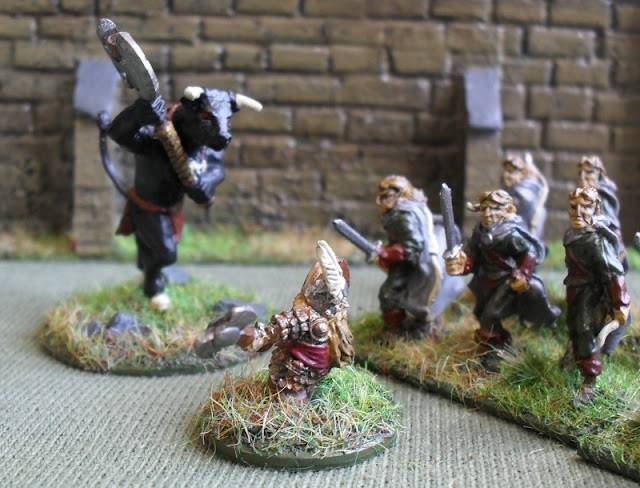 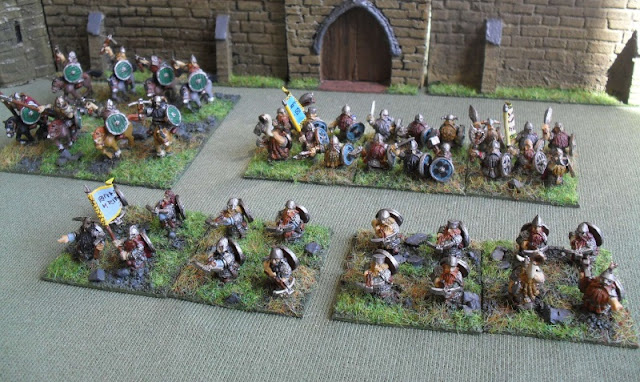 The Battle Valor Games Dwarians I painted this month. 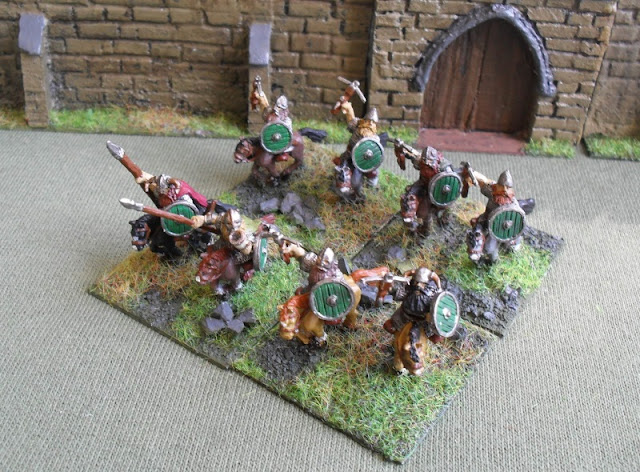 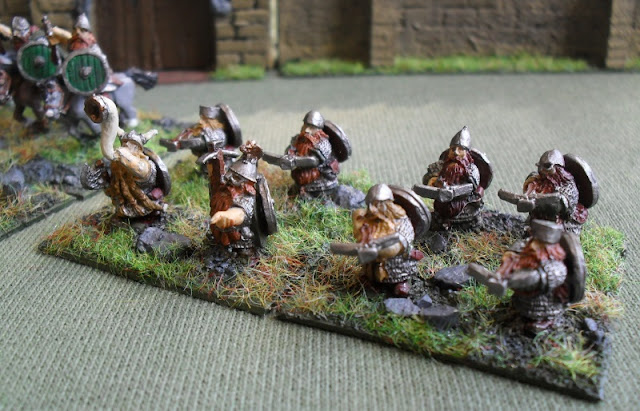 More pictures on my modelling log.
Posted by David at 20:32 No comments:

[RPGs] The Trouble with Trolls

Last weekend, we resumed our AD&D game after a brief hiatus.

The party had discovered a pair of enchanted jars which transported a person from one jar to the other. One jar was located in the dungeon under the old ruined town of Poulcatte - we had moved it from where we had first discovered it to a more defensible location - while the other had been in an abandoned house in the new town of Poulcatte, until we moved it to our house (which we were forced to sell to the Temple in return for some Resurrections due to a partial TPK) and then to our lodgings at the Sleeping Dragon Inn. We had had some plans to use the jars to give us ready (and secret) access to the dungeon but, on the occasion of the partial TPK, we had discovered that the Trolls who had caused the partial TPK could also pass through the jars into the basement of our house.

After a fierce battle, and some blind luck, the invading Trolls were dispatched, the dead members of the party were carted off for Resurrection, and the house - still reeking of burnt Troll - was handed over to the Temple to settle the outstanding bill.

A few days later (ie at the start of the latest session), the party decided to return to the dungeon to explore some more and, hopefully, recoup some of their financial losses.

On our previous excursion - the one that went rather pear-shaped and nearly resulted in a TPK - Asingel the Mighty, Half-Elf Fighter, had been the first to pass through the Magic Jars into the Jar Room, and had then been surprised by the Trolls. This time, Bayern the Ranger decided to lead. Popping  out of the Magic Jar in the Jar Room, he discovered two Trolls peering down the hole at the far end of the room, which lead to the Giant Mushroom cavern.

As he had Surprise on the trolls, Bayern was able to leap back through the Magic Jar to warn the rest of us of the presence of Trolls. Undeterred by the danger, we decided to attack! We discovered that by carefully positioning ourselves around the Magic Jar, multiple people could pass through the Jar at once.

Halbeard the Dwarf Fighter, Bayern the Ranger, and Asingel the Fighter formed the front rank, with Caine the Magic User/Cleric and Arloc the Fighter/Assassin in support. The Trolls obliged by charging.


After a brief, yet fierce, battle, the Trolls were dispatched in the time-honoured fashion. During this process, it was noted that both Trolls had an oddly deformed ear. The party then debated as to which direction to explore.

At this point, Bayern scouted the hall outside the Jar Room and spotted another Troll lurking way down the passage in the next large room.

As Bayern rangered his way down the hall, the Troll moved out of sight towards the door to the right. Giving chase, the party fought and dispatched this Troll as well. Again, it had a deformed ear - very puzzling.

Through the door to the right, we found a Magic Jar wedged in the ceiling of the next room. Periodically, a blob of flesh would drop through the jar, land on the floor, and then grow into a Troll. Ewww! We suspect that a Troll is trapped against the other end of the Magic Jar and as it regrows the damage inflicted upon it by the Jar, a piece of Troll flesh is removed by the Jar and dropped into this room, where it becomes a clone of the original Troll.

Bayern managed to wedge a piece of dungeon detritus into the mouth of the Jar, which seemed to stop the Troll pieces coming through. There is a possibility we have set up a feedback loop where the piece of Troll flesh will bounce backwards and forwards between the Magic Jars until a, rather confused, Troll regenerates and breaks out one end or the other.

Beyond this room, we found another series of corridors, and another Troll. This Troll was dispatched by Arloc who sneaked up and assassinated it.

This was the first opportunity I have had to use my new Hirst Arts dungeon tiles. We were all pleased at how well these worked, and looked, on the table. I need to get another set, and some more doors and doorways.
Posted by David at 11:27 No comments: